Assessment of an existing steel walkway structure, installation of new temporary foundations and sequence for cutting and moving the walkway. The scheme was DDA compliant and included the realignment of the station entrances.  New hoardings were designed to secure the site.

Andun were involved with the scheme from the very beginning in 2013 through to final completion in 2017.

The works were as follows:

Two large excavations had to be opened up within each embankment to facilitate the construction of the new abutments. King pile walls were chosen based on client preference. To reduce the embedment depth of the king piles good use was made of the blinding to tie the king piles back at the base of the excavation to the newly installed piles. Assessment of the adjacent wing wall in the temporary condition was undertaken.

To install the new service bridge a 350Te crane was required. Andun proposed to place the crane directly on the bridge, thereby placing the outriggers over the abutments. This ensures a stabilising load is applied to the abutments, rather than a destabilising load if the outriggers were behind the abutment or wing wall. An inspection of the bridge was undertaken, followed by the production of an AIP submission. The submission included a check on the new service bridge being transported over the bridge, as it was an abnormal load.

This sounds a relatively simple task; however, given the nature of s tie within central London it became anything but. Large excavations had to be created within the station entrances, whilst maintaining access to the station. This required intersting design colutions.

The bridge was demolished and rebuilt during a 200 hour possession over Christmas 2016. Andun were heavily involved in the planning and sequencing of the works.  We provided site full 3d sequence drawings for the works supervision during the demolition and early stages of the reconstruction.

The works Andun undertook were very varied in nature and included the following. 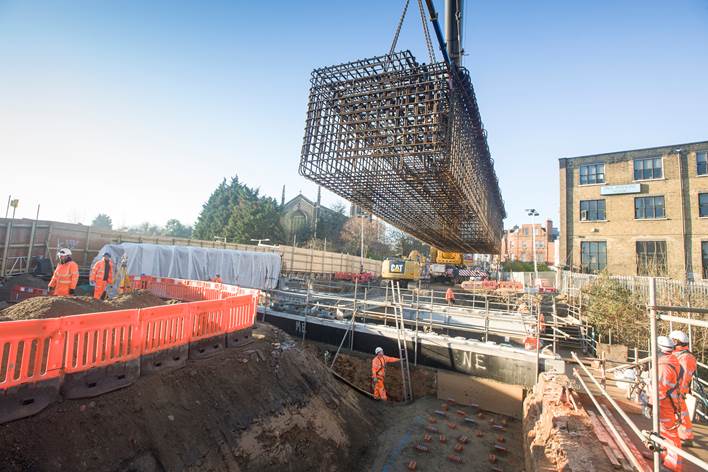