The structure was located in an environmentally sensitive area over the fast flowing Loughor Estuary in South Wales. The structure consisted of 16 spans of approximately 40ft; with the approach spans at each end approximately 50ft. Each span consists of 4 plate girders, with a central RSJ, and cantilevering supports each side. The superstructure is supported by timber piers (the original being designed by Isambard Kingdom Brunel) with the approach spans supported on concrete bearing shelves. The viaduct was originally constructed in timber during the 1850’s and replaced with a steel structure in 1909. The structure was in a poor condition throughout with significant loss of section and significant rot to timber deck

Andun were appointed by Gilpin to produce the F002/03 submission for the demolition works. The package included: 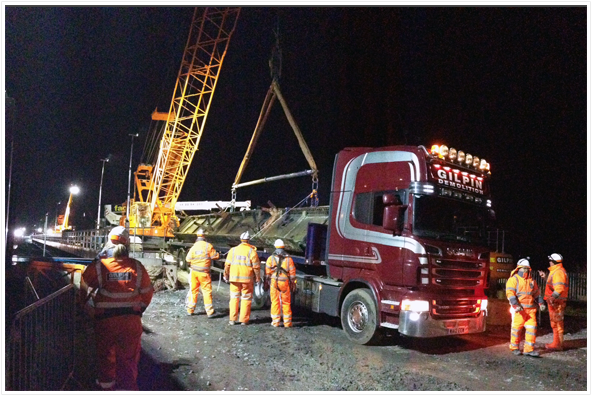 To further complicate the project, the replacement viaduct had been constructed alongside the original on a series of temporary supports. The bridge was to be slid into position following the demolition works; however, the critical path for the work was installing the new abutments for the bridge. To facilitate the installation of the new abutments the end bays of the bridge original viaduct had to be removed first, thereby leaving a potentially unstable structure without any longitudinal restraint. This required careful consideration to demonstrate that there was no danger of the structure collapsing during the demolition works. A temporary restraint system was detailed to mitigate this hazard.

The demolition works were undertaken in the following manner: