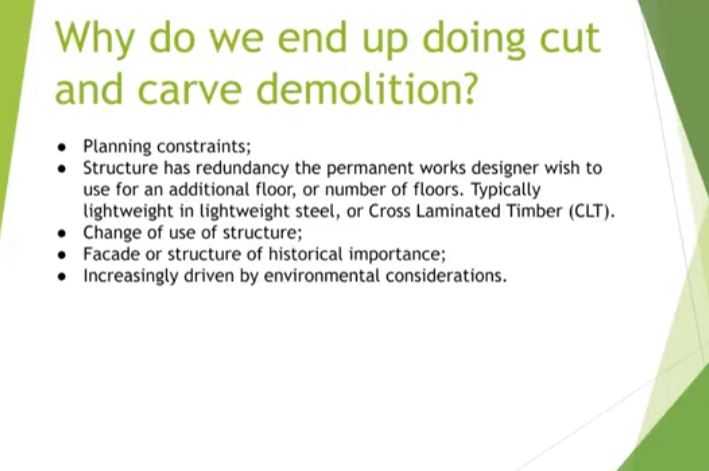 Construction Trends Driving Use Of Cut and Carve Demolition

By Kristain Downer10th September 2021No Comments

Cut and Carve demolition is the methodology used on construction & redevelopment projects where an element of an existing structure is retained as part of the construction.

Cut and Carve demolition is combined with temporary works to demolish a structure in a controlled way, to retain and modify the existing structure for its future use, which can include the additional floors.

The use of cut and carve demolition by the construction industry has increased over recent years as planning, environmental and economic considerations increase the demand for the repurposing and reconstruction of existing structures.

There are three main factors that may contribute to a rise in the retention of existing structures in projects and therefore lead to an increase in demand for cut & carve demolition methodologies during construction and redevelopment projects.

The regeneration of existing structures rather than a complete demolition and rebuild is generally seen as more favourable by planning authorities.

Making the retention of existing structures for construction projects more enticing for developers than complete demolition and starting from scratch.

The use of buildings often changes as the demands of the population and industry change.

The pandemic is likely to fuel an increase in applications to change the use of structures, potentially from office to residential requiring a number of structural changes.

This can include the addition of additional floors where there is enough structural redundancy.

Another factor contributing to the appeal of retaining an existing structure is the focus within the construction industry to reduce the sectors carbon footprint.

Andun Engineering Consultants have been involved in a number of cut and carve demolition projects, providing the demolition methodology and temporary works designs.