Demolition engineering and lifting design for the removal of a signal box at Spooner Row in Norfolk.

The Spooner Row signal box was installed in 1880 and replaced in the 1920s with a Great Eastern Railway (GER) type 2. The signal box became obsolete following the automation of the level crossing signaling and gate operation in December 2012.

This was one of four signal boxes to be demolished, however, the north Norfolk railway requested that it be retained and preserved.

This required the design of an engineering solution to lift the timber structure intact onto transportation ahead of being placed on a new concrete base at the North Norfolk Railway.

This did not include the brick toilet or the coal storage structure underneath was to be demolished in-situ. 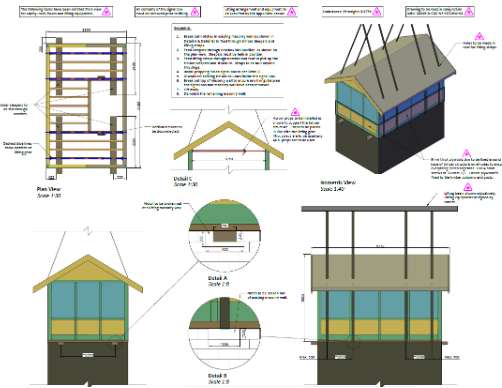 Andun proposed the design of a simple and cost-effective solution to lift and transport the signal box onto the low loader.

The design was to needle into the masonry and put sleepers on either side of the structure.

The timber sleepers were to be fed through the notches spreading the load across the floor joists. As the joists were built into the frame, it was possible to lift the entire structure.

A sling would then be put underneath the structure to then be lifted and moved onto the low loader. Once the wooden signal box was removed the brick structure underneath was to be demolished in-situ.

The design was implemented by the demolition contractor in March 2021.

The signal box has now been moved to its new home at Wymondham Abbey station on the Mid-Norfolk Railway, where it will be fully restored.